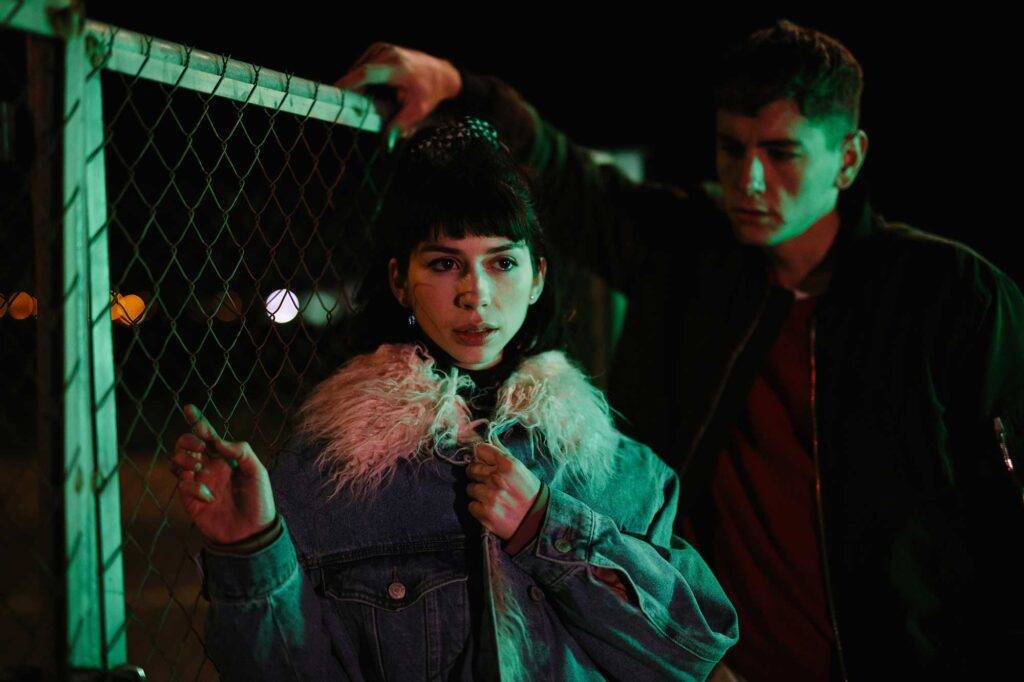 When you first lay eyes on Javier Diez’s Mysterious Lights shoot, you know right away that you’re dealing with something dangerous. Diez uses several filmmaking techniques to create the tension and drama that we love about neo-noir cinema. His shoot is a testament to the fact that stock footage can be as cinematic as an arthouse film.

For those unfamiliar with the genre, neo-noir takes classic film noir conventions and applies them to more contemporary settings. Films like Drive, 2014’s Nightcrawler and both Blade Runner editions are great examples of modern cinema that nail the neo-noir aesthetic and atmosphere.

Diez shoots his footage with intentional narrative structure and sexy shadowy lighting. This brings his characters to life in a gripping neo crime drama a la stock footage. Here’s how he did it:

Diez introduces us into his world by using bold key and backlights with a subtle (if even present) fill light (check out our simple lighting tutorial for more on 3-point lighting systems). This method creates high contrast and dark shadows both on the subject and in the distance. The use of minimal fill lights tells us that we’re in for a psychological thriller — and we are ready.

The use of sinister glowing reds to light the unrevealed contents of a trunk tells us that whatever is in there, it ain’t good. It is drugs? Weapons? A pile of unmarked bills? A dead body? Diez never reveals the answer but uses lighting to communicate that the trunk definitely contains trouble.

In addition, lighting our protagonists with nothing but a car’s headlights creates a sense of dread. All these lighting techniques support Diez’s neo-noir-esque narrative and set the stage for compelling cinematic stock footage.

Neo-noir characters are the anti-heroes of cinema. They are imperfect, often have troubled pasts, and are usually up to something questionably immoral. But nonetheless, we root for them because our filmmakers convince us that we should.

Diez once again kills it in this realm. Our lead characters are young lovers who are obviously in some kind of trouble — likely of their own making. But the direction and character profile doesn’t communicate any sort of remorse, panic, or fear. Instead, as is common with most neo-noir anti-heroes, there is a resolute commitment to their actions and expressions. Whatever mess they’ve gotten themselves into, there’s no going back.

Diez further strengthens his character profiles with simple additions like our heroine smoking a cigarette next to a gas station. It’s stupid and reckless…and we love her for it. This sentiment is echoed in the male lead. Our hero texting on the sidelines communicates some sort of deal being made — one that we want him to make. Regardless of the nature of the trunk’s contraband, we want these young lovers to get away with whatever crime they’ve committed.

Right down to the final runaway shot, we route for our duo. They may have successfully made the deal and are off to start a new life. But earlier we saw the couple face the car’s headlight straight on with confidence. Now, the menacing lights tailing them suggests that they could be caught at any moment. Are they done for? Was the whole heist all for naught? That uncertainty and uncomfortable lack of resolution is part of what makes for great neo-noir cinema and gives “Mysterious Lights” its ultimately mysterious conclusion.

Productions like “Mysterious Lights” are a gold mine for creative projects that require stock footage. Video shoots with multiple clips and stills add flexibility to a director’s or editor’s options. In addition, by shooting a series of clips with an underlying storyboard, Diez creates context and vision. You could grab any one of his clips and communicate an arthouse neo-noir vibe that feels like anything but predictable stock.