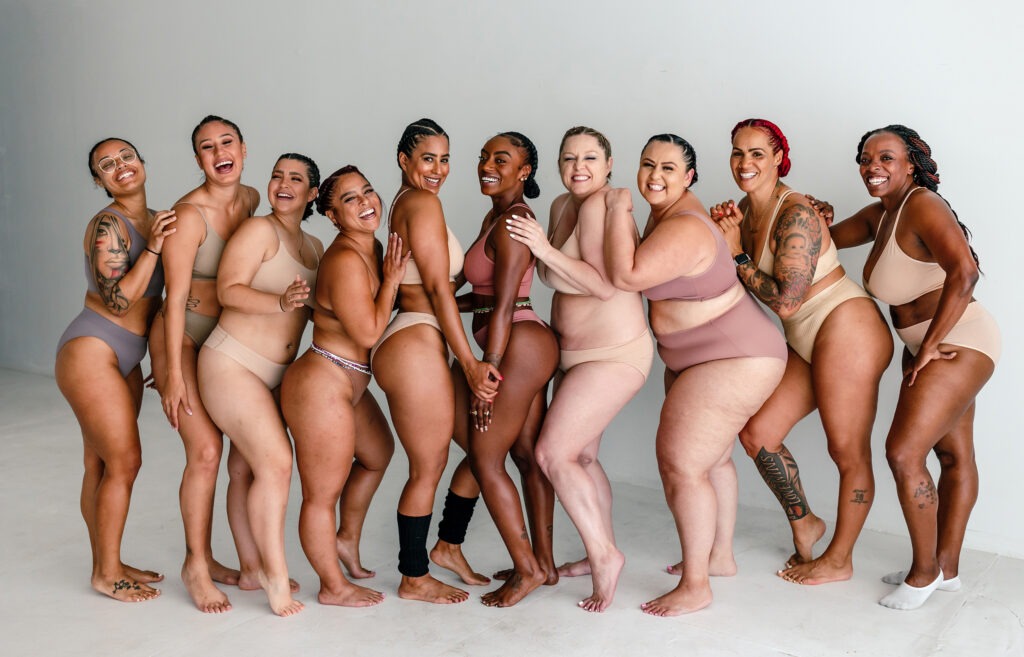 In the last decade or so, we’ve all likely taken note of the movement in the media to showcase a more realistic and inclusive representation of human bodies. We are finally beginning to see less gratuitous photoshopping to remove cellulite, blemishes, and even ribs to give the impression of a “perfect” body type – whatever that means. In its place, we are seeing more untouched imagery and a wider-reaching representation of the beauty of everyday bodies of all shapes, sizes, and appearances.

As our imagery and messaging move toward inclusivity and a better representation of body diversity, navigating language that doesn’t offend, hurt, or disrespect people while still being able to discover and present images of varying body types can be a challenge.

Labels in general are becoming a thing of the past, especially ones that describe human qualities as “average” “regular” or “normal” – so what is appropriate messaging for all of our different shapes and sizes? And then of course, what is normal anyway? Does a baseline for being human exist? That’s an evolving conversation, but we’ve researched some of the preferred language and keywords to use in order to find relevant content and build campaigns that treat people and their bodies with the respect they deserve.

TELL A STORY ABOUT PEOPLE

Diversity campaigns specifically about body image or body positivity are amazing. But it’s important to go beyond drawing attention to the thoughtful inclusion of body types and to include varying bodies as a standard routine — i.e. When considering diversity in your projects, integrate a range of body types and expressions alongside intersections like age, ethnicity, and gender. We want to see beautiful bodies from everyday life that tell a story about people, not just drawing attention to their bodies. By incorporating more body diversity into everyday media imagery, we can begin to show a more accurate representation of the modern world and empower the people living in it.

The most prevalent body topic in current media is how to view and speak about people who have curves. Plus size has become a common descriptor, however, it can be problematic as it assumes a normative numerical baseline and that all people beyond an arbitrary clothing size are deemed “other”.

In plus-size’s stead, Curve and Curve Model are gaining popularity as more models and women in general prefer to be defined by body shape rather than size. Plus size, however, continues to be a common term and still has a place in media (these things don’t change overnight) but as we keyword, search for, and implement images of curvy people, try combining plus size with curve, curvy, or curve model in tandem for more inclusive, progressive projects.

PEOPLE OTHER THAN WOMEN HAVE BODIES TOO

Although the media has traditionally focused on scrutinizing women’s bodies, people of all genders also face body image challenges and want to see themselves represented in the visual language surrounding them. When designing body positivity projects and campaigns, don’t forget to include men, non-binary folks, and all varying gender identities so we can all destroy body shaming together.

THE NEW NORM IS NO NORM

As the number of people who are defined as “plus-size” or “big and tall” continues to grow, we see a shifting landscape of what the “average” human looks like. But rather than using language suggesting that curve models are the new norm and shaming those that are outside that umbrella, we can work towards ditching the entire concept of “norm”. Opposition based messaging like “Real women have curves,” or “Skinny people need to eat more cheeseburgers”, can be replaced with body image affirming phrases like “Confidence is the new sexy” or “People should eat whatever makes them healthy and happy.” The more messaging we use to empower all healthy bodies, the more we can move toward a culture that doesn’t require unnecessary normative baselines.

BE SURE OF YOUR USE CASE

There are plenty of people in the world who suffer from body-related illnesses and we still need imagery and campaigns to raise awareness about body dysmorphia and habits that cause us harm. But be sure to read image descriptions so you know the model and photographer had intended to illustrate illness or health issues as the subject matter.

CONSIDER YOUR USE OF

It is in our power to begin changing perceptions and to take responsibility for the messages we send to people about body inclusivity. Individuals can only do so much to combat being pushed to the fringes of representation and respect. Media has the ability to help change perceptions around body diversity. Instead of telling people of different body types to “stop caring”, let’s show them that we do.

Stocksy is a royalty-free stock media agency specialized in conceptual and authentic imagery that captures the modern world. We are committed to enabling the entire creative class to execute — without compromise — meaningful, forward-thinking work that drives social progress.

How Meta propelled their progressive business marketing with Stocksy media